SINGAPORE, 13 March 2019: Vietjet has announced its status as the official airline to transport Vietnamese contestants and Asian talents on their journey to the third season of Asia’s Got Talent 2019.

This year, Vietjet will accompany two outstanding acts from Vietnam to compete in the show.

Additionally, the winner of Asia’s Got Talent 2019 will receive complimentary tickets on all Vietjet routes for one year and also be invited to participate in various inflight activities organised by the airline.

Asia’s Got Talent is the 67th adaptation of the record-breaking hit, “Got Talent”, a series created by Simon Cowell’s company Syco Entertainment and co-produced by Fremantle Media.

The “Got Talent” series is one of the most popular TV shows in history and currently airs in 186 countries.

Open auditions for Singaporean applicants had already taken place in 2018, with Singaporean participants having passed and proceeding to compete in the show this year.

Viewers can watch Asia’s Got Talent season three every Thursday at 2030 on AXN. 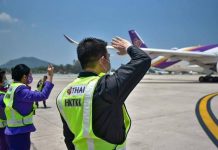