SINGAPORE, 30 June 2020: Vietjet is now ready to resume international flights from Vietnam starting July albeit with precautions to ensure safety for passengers and staff, the airline’s board told shareholders at the weekend.

In a summary of the 2020 outlook and development plan, the airline acknowledged it had been impacted severely since the beginning of 2020 due to Covid-19 pandemic, but all domestic operations in Vietnam had been successfully reinstated.

Following the resumption of domestic flights, Vietjet introduced at the AGM its “Returning to the Sky” campaign that will ultimately see it inaugurate eight new routes and increase its domestic flight network to 53 routes by the end of 2020.

In its report to the shareholders, the airline noted that Thai Vietjet was also the first airline to reopen operations to Phuket Airport, in southern Thailand and has resumed services to five other cities from its base in Bangkok.

The Vietnamese government is currently implementing initiatives to support airlines, such as tax and fee reductions and loans with low rates. With the government’s support, it is expected that Vietjet will be able to operate 90 aircraft with over 118,000 flights to transport more than 20 million passengers by the end of 2020.

Despite the current challenging business climate, Vietjet forecasts it will pay a dividend for the fiscal year 2019 representing a 50% improvement per share.

According to the executive board’s report presented at the AGM, 2019 the airline continued to achieve growth and indicated sustainable development with positive business results. 2019 also marked an important milestone in the carrier’s journey as it celebrated reaching 100 million passengers.

2019 Milestones In 2019, Vietjet added 34 new routes, increasing its flight network to a total of 139 routes composed of 44 domestic and 95 international routes. The airline carried more than 25 million passengers. 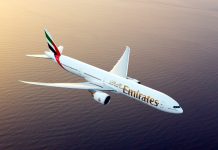