HALONG BAY, Vietnam, 21 February 2019: Paradise Cruises launched its new day sail of Halong Bay, 15 February, with luxury options including a cabin for an after lunch snooze.

The day-cruise package, with all the bells and whistles including a private cabin, will set you back USD240 for two people, about the same as a four-star hotel room in Hanoi.

Two of the cruise company’s four cruise boats, that are fitted out with 17 cabins, were assigned to offer day trippers the same sailing experience previously reserved for guests on overnight cruises.

The vessel’s 23 sqm cabins have private balconies, ensuite bathrooms and plush beds, and are available to day trippers who seek a more private experience on the six and half-hour cruise of the UNESCO World Heritage bay.

In addition to the on-board spa guests can admire the bay’s iconic limestone karsts from the sundeck. Vietnamese cooking classes are also hosted on the sundeck during the day voyage.

Paradise Luxury day cruises can cater up to 50 passengers per sailing.

The itinerary includes exploration of Sung Sot Cave, kayaking in Luon Cave, and a climb to the summit of Soi Sim Island for panoramic views of the bay, before the cruise returns to the marina at 1700.

Paradise Cruise’s one-day ‘Paradise Luxury’ tours are priced from USD120 per person (VND2.8 million), based on two people per cabin including a private cabin, transportation, sightseeing fees and meals.

Non-cabin packages are available from USD95 per person (VND 2.2 million).

Since it opened last September a new highway has cut the four-hour transfer time between Hanoi and Halong Bay to around just two hours. In addition Van Don International Airport, located 50 km from Halong Bay, opened at the end of 2018 offering an alternative to flying to Hanoi.

Paradise Cruises is part of a group that owns and operates the Paradise Suites and Paradise Trend hotels in Halong Bay and a chain of restaurants across Vietnam. 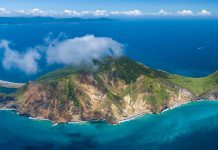