PHNOM PENH, 8 November 2018: The owners of Siem Reap’s Raffles Grand Hotel d’Angkor and the Raffles Hotel Le Royal, in the capital Phnom Penh, have scheduled a major renovation of the two properties starting in the second quarter of 2019.

Described as a major refit, work will commence on the Phnom Penh property 1 April when the annual peak season November to March winds down.

According to a press statement renovation projects on both heritage hotels will be done in staged phases.

The Raffles Hotel Le Royal in Phnom Penh will start the first of a one-year project, 1 April. It should complete all three phases by May 2020.

The management has confirmed to tour operators that it will not close the hotel during the yearlong project.

Renovations of the Raffles Grand Hotel d’Angkor in Siem Reap will require the property close from 1 May 2019 through to the end of October 2019.

The press release described the work as a modernising “facelift” that will ensure its character and heritage ambience remains intact. 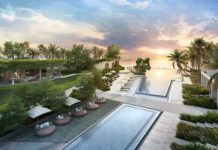