The deal is bookable until 25 June on flights from Suvarnabhumi to Phuket. From Don Mueang airport to Phuket, a higher fare of THB599 applies per trip. The travel period is from 1 July to 30 November 2021.

AirAsia Thailand chief executive officer,  Santisuk Klongchaiya said: “We remain highly optimistic on the positive developments as a result of the government’s efforts to combat COVID-19 and its harsh effects in the travel and tourism sector.  The launch of the Phuket Sandbox model signals more opportunities to stimulate the local economy.”

From July onward, AirAsia plans to increase frequency on all of its domestic routes to sustain the increasing demand, especially  Phuket.

Direct flights to the province are being increased with Don Mueang-Phuket three times daily and Suvarnabhumi-Phuket four times weekly (Mondays, Wednesdays, Fridays and Sundays).  AirAsia also plans to up its domestic flights by 30% next month. 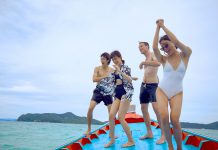