YANGON, 3 March 2021: Justice For Myanmar has added 26 companies to its list of business associates of the Myanmar military, including international companies, and one of them may have a business link to Hilton Asia Pacific.

The update is based on a release of files from the Myanmar Investment Commission by Distributed Denial of Secrets (DDoSecrets), shared with Justice For Myanmar.

The release includes entries of the Investments Management System, proposals and permits, many of which are labelled “secret” or “confidential”.

The DDoSecrets release includes the investment permit for Eden Hotels & Resorts Company Limited issued in January 2015 for a hotel on prime real estate at Ngapali beach in Arakan State, developed under a build-operate-transfer contract with the office of the quartermaster general of the Myanmar army.

Justice for Myanmar alleges that the property is currently being operated as a Hilton Hotel, under a partnership between the international hotel brand and Eden Hotels & Resorts.

Eden Group is a major conglomerate in Myanmar with multiple interests in engineering, construction, power banking and hospitality.

Justice For Myanmar spokesperson Yadanar Maung says: “We are appalled that Hilton is operating a hotel in Arakan state that directly finances the Myanmar army. The hotel is located where the military committed genocide against Rohingya, and the hotel pays rent to the same office that buys weapons used in atrocity crimes against the people… (it’s) a shocking breach of Hilton’s human rights obligations. We call on Hilton to immediately end their business with the Myanmar military.”

TTR Weekly reached out to Hilton Asia Pacific’s office in Singapore for a comment. But no response came through or even an acknowledgement in time to appear in this report. We will update the post if and when the international hotel group responds.

Eden Hotels & Resorts’ website confirms two of its hotels are operated under the Hilton branding. They are Hilton Ngapali Resort and Spa and Hilton Nay Pyi Taw. Three other hotels use Eden’s own brand,” Link”. Hilton Ngapali posts the message on its home page, ” we are not open right now.”

Yadanar Maung concluded: “We reiterate our call for international targeted sanctions against all businesses that maintain commercial relationships with the Myanmar military.”

Justice For Myanmar (JFM) is a covert group of activists campaigning for justice and accountability for the people of Myanmar. Justice for Myanmar’s public website launched on 28 April 2020. 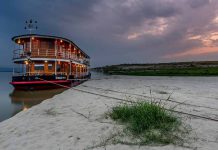