The agreement confirms the airline will purchase  7 million gallons of sustainable aviation fuel (SAF) annually for five years starting from 2027.

The expected value for the agreement is USD192 million over the five-year period, including associated environmental benefits. The agreement is part of the Oneworld alliance’s plan to purchase up to 200 million gallons of sustainable aviation fuel annually from Gevo for its member airlines.

“Finnair has ambitious emissions reduction targets: by the end of 2025, we intend to halve the net emissions from 2019 and achieve carbon neutrality by the end of 2045. SAF plays an important role in reaching these targets,” says Finnair’s SVP for sustainability at Eveliina Huurre.

Finnair has also made a purchase agreement with Aemetis for 17.5 million gallons of blended sustainable aviation fuel delivered during 2025-2032. Finnair has earlier partnered with Neste in Finland to increase the use of SAF and hence reduce carbon emissions.

Meanwhile, the airline announced Thursday that all flights at Helsinki Airport depart from one single terminal, as T1 and T2 become part of the airport’s history following a massive remake of the terminal facilities. The new spacious arrival and departure halls in the brand-new single terminal opened to passengers earlier this week, promising to make flight connections smoother. 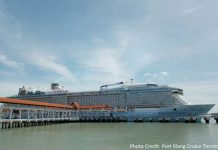