LANGKAWI, 25 June 2021: Langkawi Development Authority is promoting the island’s UNESCO Geopark through a new video in readiness for the day the popular island destination reopens to international visitors.

An archipelago of 99 tropical isles attracts international visitors who head for Langkawi’s beaches and five-star resorts, but as one of 94 UNESCO Geoparks worldwide, it attracts serious nature lovers.

Langkawi’s islands and beaches hold records of the earth’s story that go back over half a billion years. Records tell of the birth of the land now known as Malaysia and Langkawi is the country’s only location with such complete records.

Over 90 geo-sites have been found in the region, but three distinct areas form the Langkawi Geopark, each with its own unique geological significance.

Situated on the northeast of Langkawi Island in the area around the Kilim River and its estuary, the terrain here is predominantly limestone (karst). Millions of years of erosion have created a unique landscape of pinnacles, cliffs, caves and hills, as well as the rich biotopes of the mudflats and the mangrove eco-systems.

Explore the Kilim Geoforest by boat in order to reach places inaccessible by land, or walk around and discover some of the unique geological features, including ancient fossil beds and stalactites. Here you can find plenty of marine life in the emerald green waters below as well as spot birds, including the islands famous eagles, up high.

The Machinchang mountain range in the north-western corner of Langkawi, and Gunung Raya, a granite mountain at the centre, is renowned for their Cambrian (first geological period of the Paleozoic Era) rock formations.

The rock here is predominantly sedimentary sandstone and granite and forms a spectacular landscape that dominates the skyline. Machinchang is Malaysia’s oldest mountain range and home to what is probably the most ancient rainforest on the planet. The oldest part of this Geopark is Teluk Datai. This is where the oldest grains of sand rest, its history displayed in the exposed surface of sandstone in the upper part and mudstone/shale in the lower part.

South of Langkawi, you will find the second-largest island of the archipelago, Pulau Dayang Bunting. Dayang Bunting means Pregnant Maiden, a name given to this island due to the suggestive shape of the hills on this island.

Famous for the freshwater lake found nestled amongst hills of rugged forest, it is also known as the Lake of the Pregnant Maiden. The lake originated as a massive limestone cave that collapsed. There you will also find the finest Permian marble formations in the world. 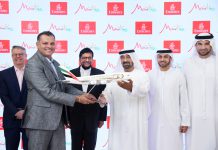