According to the Vietnam News Agency report, the corporation will invest nearly VND100 trillion (USD4.3 billion) on the project’s first phase. More than VND36.1 trillion will be sourced directly from ACV and the remainder from bank loans.

The total budget is estimated at VND336.63 trillion to complete all three phases of the project by 2035. It will become the country’s largest airport.

In the first phase, due to be completed in 2025 the project will have one 4000m-runway, taxiways, an apron, and a passenger terminal will serve 25 million passengers and 1.2 million tons of cargo annually.

Ultimately, the airport will have four runways, four-passenger terminals to ensure it can cater to a maximum capacity of 100 million passengers and 5 million tonnes of cargo a year by 2035.

Covering more than 5,580ha, the airport will straddle six communes in Long Thanh district. Around 4,800 households in 26 communities will be relocated to make way for the mega project. 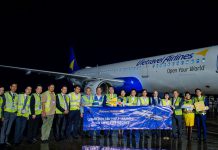