The package for locals is also in line with the government’s efforts to boost tourism, especially with tax relief of MYR1,000 for domestic tourism that was announced earlier.

“Since the campaign’s launch, Sunway Pyramid Hotel has registered a booking occupancy of 80%,” Chan added.

The surge in domestic bookings is a national trend. In the latest figures presented by Tourism, Arts and Culture Minister Datuk Seri Nancy Shukri, the tourism sector has seen an upsurge, with hotel reservations nationwide rising up to 30.74% until June 2020. 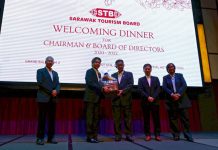