HANOI, 2 December 2019: Bamboo Airways will launch a new Hanoi-Melbourne service according to reliable sources in the airline.

When asked for more details an airline spokesperson told TTR Weekly the flight would start by the end of December or at the latest in January 2020.

In an earlier report, the online news service Vietnam News Agency said Bamboo Airways signed an MoU with Melbourne International Airport last Tuesday that opens up the way for it to start direct flights.

In a press statement, the airline said it would be the first Vietnamese carrier to fly to an Australian city using a Boeing 787-9 Dreamliner.

In 2018, Australia suppled 387,000 visits with an average spend of VND36.6 million (USD1,580) per trip according to the Vietnam Tourism Annual Report published by the Vietnam National Administration of Tourism. 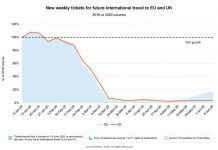