HANOI, 17 September 2019: The 21st Vietnam Film Festival, under the theme ‘developing a national, humanistic, creative and integrated cinema industry, will take place from 23 to 27 November in Vung Tau city.

Hosted by the southern province of Ba Ria – Vung Tau officials released details during a press conference at the weekend.

The main activities of the festival will be the awards ceremony and a seminar on shooting movie scenes in Vietnam.

For visitors, the highlight of the event is the screening of films and an exhibition themed “Vietnamese seas and islands through the cinematic perspective.”

The organising board will present the Golden and Silver Lotus awards to the most outstanding entries in different categories including feature film,s documentaries, scientific films and cartoons.

Tourism officials said the festival was an opportunity for Ba Ria – Vung Tau province to promote its landscapes, people and tourism potential to both domestic and international visitors. 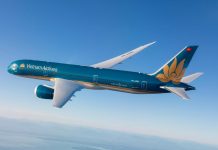 Vietnam Airlines flights back to normal