SINGAPORE, 18 September 2019: TripAdvisor published its first-ever Review Transparency Report on Monday, revealing for the first time details about its review moderation processes, as well as statistical data on the volume of fake review attempts targeted at the platform in 2018.

It details how TripAdvisor combat fake reviews posted on its pages. It also provides a detailed breakdown of the proportion of reviews that were either blocked or removed.

“Ensuring that TripAdvisor is a trusted platform for our users and listed businesses is a top priority. We’ve continued to make advancements to our industry-leading fraud detection efforts in recent years, but it’s a daily battle, and we are far from complacent,” said TripAdvisor senior director of Trust & Safety Becky Foley. “While we are winning the fight against fake reviews on TripAdvisor, we can only protect our corner of the Internet. As long as other review platforms aren’t taking aggressive action, then fraudsters will continue to exploit and extort small businesses for cash. It is time other platforms like Google and Facebook stepped up to the plate to join us in tackling this problem head-on.”

There are a number of reasons why TripAdvisor rejects or removes reviews, ranging from guideline violations to instances of review fraud.

The report also described TripAdvisor’s efforts to catch paid reviewers. Paid reviewers are individuals or companies that try to sell “user” reviews to businesses listed on the site. Since 2015,

TripAdvisor has stopped the activity of more than 75 websites that were caught trying to sell reviews, including one individual who was sentenced to nine months in prison by the Criminal Court of Lecce in Italy last year.

“Consumer reviews have become essential to millions of tourism activities around the world. It is progress, provided that, as recently recommended by the World Committee on Tourism Ethics, these reviews are reliable and unbiased,” said Pascal Lamy, Chairman of the World Committee on Tourism Ethics at the UNWTO (World Tourism Organisation). “It is, therefore, encouraging to see that platforms such as TripAdvisor are committed to transparency on how they monitor, control and manage the reviews they receive in order to avoid abuses and frauds.” 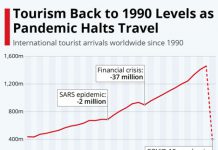