SINGAPORE, 27 August 2019: Hotels in the Asia Pacific region reported mostly negative results across the three key performance metrics during July 2019, according to data from STR.

Based on US dollar constant currency, July 2019 when compared with July 2018 the average occupancy across the Asia Pacific stood at 73.2%, a slight 0.2% improvement.

STR analysts note that ongoing protests in Hong Kong, now in their 12th week, have affected performance levels in the market.

Hotel demand for the month fell 3%, and preliminary figures show a double-digit decline in visitor arrivals during the second half of July, according to the Hong Kong Tourism Board.

That steep drop follows a first half-year that showed a 13.9% increase in visitor arrivals.

The country eclipsed 90% occupancy for the first time in its history. STR analysts note that the transient segment (bookings of less than 10 rooms) produced strong demand growth (+7.1%) during the month, while group (bookings of 10 or more rooms) demand fell 7.2%.

According to the Singapore Tourism Board, the country welcomed 9.3 million international visitors during the first six months of 2019.

STR’s sample comprises more than 65,000 hotels and 8.8 million hotel rooms around the globe. Travel will kick back strong 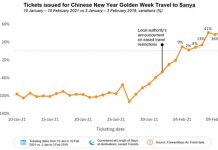 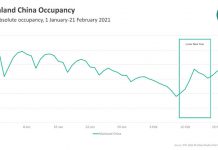