PHNOM PENH, 13 August 2019: Cambodia closed the first half of 2019 with 3.3 million tourist arrivals according to the country’s Ministry of Tourism.

In the report, first published by Khmer Times, the ministry said tourist arrivals expanded by 11.2 %.

Following the visitor trends in neighbouring Vietnam and Thailand, the top source market continues to be China with 1.2 million visits during the first six months, representing a 38% increase. More than a third of all arrivals came from China. Other strong markets included Vietnam, Laos, and Thailand.

Two important source markets, Korea and the US, decreased a trend that tourism officials said was worrying.

South Korea is considered a top market for Cambodia prompting travel executives to ask why the market has returned a 20.2% decline over the first six months.

According to the ministry, Siem Reap saw a decline, January to June, of 8% with arrivals reaching 1.2 million.

By contrast, Phnom Penh and the coastal area of Sihanoukville registered a growth of 27% to reach 2 million. 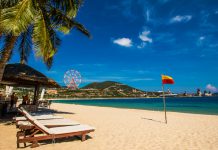