MALE, 2 July 2019: A social media campaign to save seagrass beds in the Maldives is gaining momentum according to Blue Marine Foundation and Maldives Underwater Initiative.

According to a report in The Edition an online news service in the Maldives, around 25% of all resorts in the Maldives joined the campaign #ProtectMaldivesSeagrass.

So far 30 resorts have now pledged to protect an estimated 830,00 sqm of underwater seagrass meadows.

But by the publication’s own calculation that still leaves another 90 resorts that need to come on-board to end the destructive practice of stripping out seagrass especially in lagoons close to luxury resorts.

The Edition exposed the damaging practice of seagrass extraction at lagoons in or near resorts. “Managers believe (the seagrass) spoils the clear picturesque lagoons that tourists expect to observe,” it stated in the report published Monday.

Stripping out the natural seagrass beds to cosmetically give the resorts clear blue lagoons is a practice roundly condemned by the Blue Marine Foundation that initiated the social campaign.

It warns that despite successfully winning pledges to end seagrass stripping from the seabed “some resorts are still continuing to remove seagrass” from their lagoons.

The foundation has called on the government, resorts, travel organisations and tourists to recognise that the time has come to put an end to seagrass removal.

Tourists can help by challenging resorts that are clearly cultivating “nude” lagoon seabeds stripped of all seagrass just to make them more pleasing to the eye or for ‘selfie’ photos.

If there is evidence that a resort removes seagrass from its lagoon’s seabed move on and book a resort that protects seagrass and respects marine ecology.

According to the Edition, the website www.protectmaldivesseagrass.com had more than 22,000 visits in a four-month period, with the #ProtectMaldivesSeagrass hashtag mentioned over 300 times a day at the height of the campaign.

Over 1,600 people from both the local and international community have registered their support to protect seagrass in the Maldives. The Ministry of Tourism also expressed support for the campaign.

Originally, Six Senses Laamu, inspired the campaign and has been a lead player in seagrass protection since 2017.

General Manager of Six Senses Laamu, Marteyne van Well told The Edition: “It’s inspiring to see so many resorts come together and advocate for seagrass. With the number of new resorts on the rise, it’s vital that this expansion is done sustainably to protect the unique marine environment that people all over the world come to visit”. 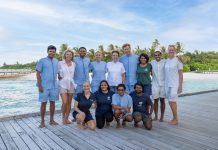