HOI AN, Vietnam, 27 June 2019: The first signs that Hoi An could be heading for an over-tourism crisis are surfacing on Facebook Page comments.

Billed as one of Vietnam’s pristine World Heritage sites, Hoi An’s tourism success could backfire due to a failure to tackle pollution.

The tiny lanes lined with wooded trading houses many of them opening up on an estuary wharf lined with boats has captured the imagination of visitors to the central Vietnam city of Danang.

But earlier this week a Facebook post exposed the other side of the Hoi An story one that could have shocking repercussions for the town’s World Heritage status further down track.

“ We just went first time to “World Heritage” Hoi An, filled with anticipation. Like everyone, we had seen and heard so much positive publicity”…. “Anyway Hoi An is a mess. A world of smelly rivers and plastic toy hawkers. Streets are teeming with selfie people, lines of them, and anyone trying to make a buck… I will never go back. It was so faked up, so Disneyland at this point. What a shame”.

“The problem is truly universal. Much can be done with regulation and control. Amsterdam, Berlin, Bruges are starting to put stringent rules in place.”

The UNESCO heritage site welcomes annually over 20 million domestic and foreign visitors and that suggests a capacity cap is long overdue for this picturesque town.

But it is not all gloom and doom. The ‘We Love Cities’ campaign that unfolds on social media, including Facebook, praises Hoi An for its efforts to battle the scourge of plastic pollution.

“Unfortunately, there is a downside to the rise of tourism and economic development in Vietnam – ocean plastic pollution,” states the We Love Cities post.

“Plastic waste poses a serious threat and can take up to 400 years to decompose and Vietnam is currently one of the countries polluting the oceans the most.”

However, it gives some credit to the city of Hoi An for adopting measures to counter the plastic waste problem.

The city fathers have already launched a campaign to limit plastic bags. They are urging residents and visitors to use paper or banana leaves to wrap food and to carry reusable bags for shopping.

We Love Cities says “Hoi An’s Women’s Union has created a long-term waste management plant to increase plastic recycling, in close coordination with public bodies. Their work has reduced the amount of waste that ends up in landfills by more than 70%.”

Vietnam News Service in a recent report claimed Hoi An is also tackling noise pollution most of it caused by transporting the throngs of tourists who visit the historical town daily and entertaining them in the evenings at karaoke bars.

Noise bans zero in on trucks equipped with loudspeakers that advertise shows and restaurants and it extends to curbing noise emitting from bars and karaoke clubs with hefty fines for offenders.

The major culprits are restaurants, bars, coffee shops, bands and DJs that cater to tourists who stay overnight either in the small riverside town or resorts at beaches in nearby districts.

Last year, Japan offered expertise and funding to deal with wastewater pollution by building a modern wastewater treatment plant on the outskirts of Hoi An.

A canal bridge built by Japanese traders in the 17th century is a monument to the historical ties between the two countries. Now Japanese experts have joined Vietnamese engineers to tackle pollution in the canal caused by households, hotels and restaurants that discharge sewage and wastewater directly into the river and canals.

Despite these challenges, Hoi An will continue to attract millions of tourists annually as more airlines from Asia’s main cities fly to the gateway city of Danang. The trick is to apply the brakes, cap room capacity in and around the World Heritage town while allowing residents to enjoy the economic benefits of the tourism boom. Not an easy juggling act. 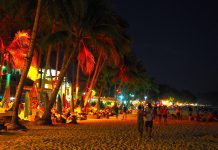