SINGAPORE 4 April 2019 – To mark the launch of two new domestic routes from Can Tho, Vietnam on 26 April, Vietjet is offering 1.1 million tickets at a zero dollar cost for bookings made by 5 April.

As usual the airline limits the window of opportunity to 1300 to 1500 Singapore time.

Promotional tickets are available for travel on all domestic routes in Vietnam not just the new routes, for travel from 4 June to 31 December**.

Vietjet offers the most flights to and from Can Tho, the capital city of the Mekong Delta area after it established three domestic routes in March.

The Can Tho – Nha Trang route will operate four return flights per week on Monday, Wednesday, Friday and Sunday with a flight time of around one hour per sector.

The Can Tho – Dalat route will operate four return flights per week on Tuesday, Thursday, Saturday and Sunday with a flight time of around 45 minutes. The flight will depart from Can Tho at 1135 and arrive in Dalat at 1220. The return flight will take off at 1255 and land in Can Tho at 1340, (local times). 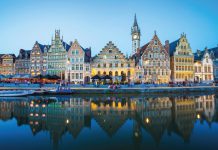