YANGON, 29 March 2019: Myanmar’s Department of Civil Aviation will conduct a new field study that could revive the Hantharwady International Airport that was slated for Bago.

Tourism and airline executives in Yangon welcomed the news that negotiations on reviving the project were once more on the radar.

Airline executives pointed out that Yangon airport despite the upgrades and extensions was already crowded with limited scope to expand further.

Myanmar Times quoted the DCA deputy director U Zaw Min last week, who was meeting with famers to discuss crop compensation in the surrounding areas of the proposed airport site.

The USD1.5 billion project has been cancelled and revisited five times, according to U Zaw Min, who reiterated that Japan had made a commitment to fund the project.

It was first mentioned as an option to replace Yangon’s airport as the gateway in the early 1990s and work actually commenced on preparing the site in 1994, but ended in 2003.

Myanmar Times said the two governments are scheduled to meet in April to review the project and possibly set a new schedule for site preparation studies.

“After the meeting, we expect to start conducting preliminary ground studies at the site of the airport,” he said.

Talks are underway to compensate farmers for loss of land and to seek solutions on how to resettle squatters living in the area.

Last year, Myanmar and Japan revived discussions on the failed Hantharwaddy International Airport Project. Both Japan and Myanmar want the project to go ahead “as soon as possible”, Ichiro Maruyama, Japan’s ambassador to Myanmar told newspapers at the time.

The airport site is located 77 km north of Yangon, near Bago city. It was supposed to open by 2022, according to a framework agreement signed in January 2016 between a consortium and the DCA.

At the time it was confirmed a consortium including Japan-based JGC Corp as well as Singapore’s Yongnam Holdings Ltd and Changi Airports International had won the bid to build and operate the airport.

But agreements on the initial designs expired without any meaningful progress. 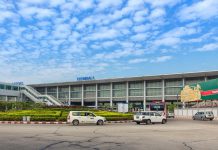