DUBAI, 18 June 2018: Emirates has launched a new daily service from Dubai to Auckland with a stop in Bali, reflecting increased interest in the attractive Indonesian island destination and improving connectivity to New Zealand.

Emirates’ new Dubai-Bali-Auckland flight provides the only yearround non-stop daily service between Auckland and Bali, giving passengers an opportunity to visit and/or stop over in one of the most popular islands in Indonesia.

The airline is operating a 777-300ER on the route, offering eight seats in first class, 42 seats in business and 304 seats in economy. The new service will also be the first Emirates Bali flight to offer passengers the airline’s award-winning first class product.

Emirates Airline president, Tim Clark said: “We are very pleased to see the interest this new route has created since it was announced in mid-February, reflected in strong bookings from Auckland to Bali and beyond, as well as southbound from our global network. Markets such as the UK, Europe and the Middle East have all responded keenly to the new option provided by us opening up this route. Bali and Auckland are both desirable destinations in the eyes of our customers.”

From New Zealand, most interest in the new route is from leisure travellers of all ages, among them visitors seeking to explore the cultural side of the destination and surfers keen to try Bali’s waves. Tourism is also expected to drive strong interest from Indonesia to New Zealand, as well as travel by students attending learning institutions such as AUT University – which last year opened an Indonesia Centre – and the University of Auckland which enjoys a high international ranking. The number of Indonesian students attending courses in New Zealand grew 20% last year.

With its spectacular mountains, picturesque beaches and cultural appeal, Bali is considered to be a world leading tourist destination, welcoming more than 4.5 million foreign tourist arrivals in 2016, including over 40,500 New Zealanders. Emirates’ new service will add to Bali’s global connectivity, further stimulating the island’s economic and tourism growth.

Auckland is a vibrant, cosmopolitan community of more than 1.6 million people – New Zealand’s biggest city, containing a third of the country’s population. Located on an isthmus between two harbours, the city has a wide range of attractive beaches, including popular surfing spots; has a global reputation as a city of sails with an extensive variety of yacht and motor vessel marinas; and a selection of bush walks within easy reach; as well as numerous award-winning vineyards. Emirates has been operating to Auckland since mid-2003.

Apart from the opportunity for a stopover in Bali, the new service will provide connections to/from London and other major European cities. The southbound flight, EK 450, will depart Dubai at 0705, arriving at Denpasar (Bali) at 20:20 local time, before flying on to Auckland at 22:00, arriving in New Zealand’s biggest city at 1000, the following day.

Passengers in all classes of travel can enjoy Wi-Fi to stay in touch with family and friends or Emirates’ multi award-winning ‘ice’ with up to 3,500 channels of movies, TV programmes, music and podcasts.

Emirates provides its customers with a host of culinary offerings prepared by gourmet chefs and fine wines that suit the tastes of everyone. Passengers can also experience Emirates’ renowned in-flight service from the airline’s multi-national cabin crew from over 130 countries, including New Zealand and Indonesia.

Emirates Skywards members can earn up to 17,700 Miles in Economy class, 33,630 Miles in Business Class and 44,250 Miles in First Class with return flights on the new Dubai-Bali-Auckland service. Members can also upgrade from Economy to Business on Dubai to Auckland route from 63,000 Miles. 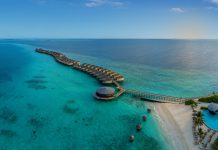