JAKARTA, 22 May 2018: Indonesia’s low-cost airline, Wings Air will launch a service. 25 May, from Balikpapan to Kota Kinabalu in Sabah state, East Malaysia.

Balikpapan is a seaport city on the east coast of the island of Borneo, in the Indonesian province of East Kalimantan.

According to timetable details from Airlineroute, the daily flight will use an ATR72-600 with 70 seats.

The flight will depart Balikpapan at 1800 and arrive in Kota Kinabalu at 1950.

The return flight will depart Kota Kinabalu at 0600 and arrive in Balikpapan at 0750.

It flies ATR 72-500s and -600s on the route to Malacca and hopes to expand services to 10 more destinations from its Medan base later this year.

Malacca was Wings Air’s second service to Malaysia, after it introduced a connection from Pontianak to Kuching in January.

The third service to Kota Kinabalu is likely to boost tourism from Balikpapan to Sabah state. 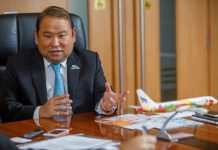