Tourism officials estimate that every day more than 10,000 TV fans visit the ancient pagodas, where the TV series’ was shot.

Thai Airways International got into the act with its own revival of traditional Thai culture and costume, this week, with a little help from the TV series’ lead star.

And to add a celebrity touch, Nirut Sirijanya (fourth from left), the star actor in the series, joined the photo shoot and a Thai costume fashion show featuring THAI flight attendants. 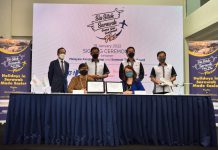