BANGKOK, 12 March 2018 Silversea unveiled plans, last week for its first-ever hull stretching by adding a mid-ship section to one of its cruise ships.

The refit of Silver Spirit will take place this month at the Palermo shipyard.

Silver Spirit will be lengthened by slotting a pre-built midsection into the hull that will house six Silver Suites, 26 Veranda Suites and two Panorama Suites.

In other  news, Norwegian Cruise Line’s Norwegian Bliss will start its first commercial cruise this June, that is currently being sold by travel agents mainly in Europe.

The ship sports the longest electric car racetrack at sea, a theme that is being used to spur travel agency sales by offering them a chance to win a cruise and compete on the ship’s race track during the Norwegian Bliss inaugural cruise 19 to 21 April.

Norwegian Bliss is the company 16th ship and will sail to Alaska and the Caribbean beginning this June.

In addition to having the largest competitive two level electric-car racetrack at sea, other amenities include two 180-degree observations lounges and a sundeck featuring two spacious pools.

Viking’s fourth ocean ship, Viking Sun, was officially named last week at a ceremony on the Bund, in the heart of Shanghai.

The ship, on a 141-day World Cruise from Miami to London, made its first-ever stop in Shanghai and became the first major cruise ship to be named in a ceremony at the Bund.

The 930-passenger Viking Sun arrived in Shanghai, last week, sailing the Yangtze and Huangpu rivers to the traditional anchorage at the Bund in central Shanghai. 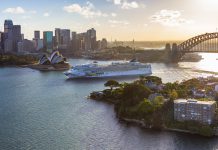 Pandaw sells one off cruise in Myanmar