The country welcomed more than 5 million tourist arrivals in the first 10 months of the year and should close the year with 5.8 to 6 million visits in 2017.

Chinese travellers are driving force estimated at more than 1 million for the year increasing by around 45%.

Based on the strong trend in Chinese arrivals and  additional  flight connections in 2018, officials are confidently targeting  around 6.6 to 6.8 million arrivals in 2018. Revenue should exceed USD4 billion.

However, Cambodia National Tourism Alliance secretary-general, Ho Vandy commented that even though tourist arrivals increased in 2017, the sector had difficulty marketing itself to international visitors.

“It was a bit tough to promote tourism in Cambodia in 2017 because of the political situation,” he said, referring to the negative political climate that saw Cambodia’s main opposition party dissolved in November, months before national elections. “But it should be better in 2018,” he added. 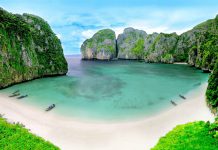 Is there a second life for Maya Bay?