To be hosted  Saturday and Sunday, 23 and 24 December, the event features both local and international bands.

It will cover a wide variety of music genres, and is expected to attract more than 10,000 visitors.

On day one, the festival will highlight local groups such as The A Street Band, Elements, Babuyramos and Aru & The Republic as well as international acts such as Safitri (Indonesia), Nicky Bomba’s Bustamento (Malta) and Ras Jahknow (Cape Verde).

Several venues along Pantai Cenang have been selected to host the performances. The area is the popular main beach in Langkawi known for its charming chalets and rows of cafes and pubs.

Yes, this festival lacks the Grammy winners, gala balls, and big stages, yet the Langkawi International Island Music Festival does promises good fun and quality music to enjoy, while adding value to a visitor’s stay during the Christmas season.

The daily performances will begin at 1700 through to sunset and end with firework displays. Music workshops are also scheduled in the earlier part of the day at several venues along Pantai Cenang. 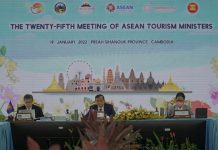