PHNOM PENH, 19 September, 2017L Cambodia’s Ministry of Tourism issued an advisory, last week, to hotels and tour companies, calling on them not to inflate prices during public holidays.

The directive was signed by Tourism Minister, Thong Khon, who warned hospitality services such as restaurants, resorts and hotels not to take advantage of domestic tourists.

Khmer Times, at the weekend, reported the campaign for fair prices would focus on Sihanoukville. a popular coastal destination a four-hour drive from the capital.

“We will first educate them by telling them why they should not hike prices during holidays. If they still ignore our warning, we will take action,” he added.

The proposal focuses on a luxury bus service that would link Bangkok, Phnom Penh and Ho Chi Minh City.

Ministry officials in Cambodia said the project had merit and agreed to conduct studies to move it forward.

One of the first issues would be to decide what platform should be used to pursue the project. Should it be under ASEAN or the Greater Mekong Sub-region known as GMS? The latter has six member countries; Cambodia, China (Yunnan and Guangxi provinces) Laos, Myanmar, Thailand and Vietnam.

Currently, Cambodia has bilateral transport agreements with Vietnam and Thailand and there are daily bus service from Phnom Penh to Ho Chi Minh City and Bangkok. 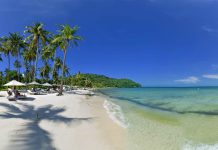