The promotion starts with a roundtrip fare, ex-Bangkok, at THB20,900 to Amsterdam and Moscow. Fare includes one piece of luggage with a maximum weight of 23 kg, as well as all taxes and charges.

Minimum stay is five days or the night between Saturday and Sunday. Maximum stay is one month.

Tickets must be purchased at least three days before departure.

Seats are limited, fares are subject to availability and may not be available on all flights. Flights may not be operated daily.

Fares could differ due to currency fluctuations. The promotion saves 35% off the airline’s fares posted on its booking website.

In comparison, Thai Airways International sells inclusive roundtrip fares starting at THB31,935 to Zurich, THB33,560 Munich, THB41,235 Amsterdam, THB44,050 Madrid and THB44,125 Manchester.  The latter is more than THB18,000 higher than Finnair and both require a change of plane (one stop).

The Zurich fare on THAI is THB7,000 more expensive than the Finnair fare. 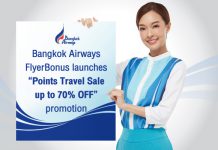