DANANG, 8 May 2017: Danang will open Son Tra night market with a walking street, next month, to offer attractions for locals and international visitors.

Vietnam Net Bridge media reported the city would open Son Tra night market and a shopping zone on the east side of the Rong (Dragon) Bridge by 12 June.

The city’s People’s Committee vice chairman, Ho Ky Minh, was quoted saying the city has assigned stretches of Ly Nam De, Mai Hac De and Phung Khac Khoan streets for the night market and walking street that will have 150 pavilions selling souvenirs, food and specialties of Danang and the central region.

It will be the first regular night market located at a pedestrian walking zone in the central city. 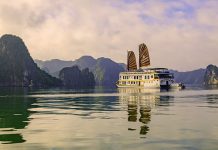