Ministry of Tourism deputy minister for international tourism marketing, I Gede Pitana, and National of Bureau of Statistics head, Suharyono, confirmed at a press conference, last week, that the country had reached its 12 million target set for 2016.

The year’s tally closed at 12.023 million visits including data from secondary border checkpoints.

According to the independent national bureau of statistics, Indonesia’s 19 major tourist entry points registered 11.52 million tourist arrivals, an increase of 10.69% compared to the previous year.

While the conventional calculations as recorded by BPS for January to December 2016, totalled 11.52 million visits, up 10.69% year-on-year, once additional data captured at land border-crossing stations especially in Kalimantan, Papua and West Timor, an additional 504,696 arrivals were recorded increasing the grand total to 12.023 million arrivals, up 15.54%.

In addition to airport and ship arrivals, foreign arrivals to Indonesia are also collected at border-crossing points in remote areas that include borders between Indonesia and Malaysia in North Kalimantan, between Indonesian Papua with New Guinea in the east and Indonesia’s West Timor and the present Timor Leste in the southeast.

In the latest adoption of technology, the Ministry of Tourism worked with IT provider company Telkomsel, which covers 92% of roaming signals around border areas to capture additional tourist data.

Tourism Minister Arief Yahya commented, that the Big Data mobile positioning data system to register tourist arrivals and traffic, is already in use in Belgium, Finland, Spain, the Netherlands and Tanzania.

Indonesia was the first nation in ASEAN to adopt the technology to arrive at accurate visitor data. The Philippines has since adopted  similar data capture technology to aid the collection of trade and tourism data. 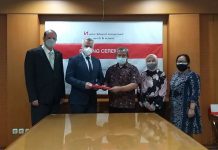