SIEM REAP, 10 May 2016: Cambodia Prime Minister Hun Sen has banned all vehicles from the front of the country’s iconic attraction, Angkor Wat, except for fire engines and ambulances.

Agence Kampuchea Presse quoted PM Hun Sen saying that the only form of transport in the vicinity of the world heritage site should be bicycles.

“This move will ensure traffic order and safety as well as to improve the beauty of the area, and thus to enhance the prestige of this UNESCO World Heritage Site,” the PM announced.

The ban includes all motorised vehicles including motor cycles.

“The rule was established about five or six years ago, but wasn’t enforced… it is now imperative that we eliminate traffic near the site  to prevent destruction of the temple.”

There are now designated drop-off and pick-up points for visitors that require a five-minute walks to reach the temple site.

The Angkor Archeological Park is the main tourism attraction in Cambodia far exceeding the importance of beach resorts in the country.

During January to March this year, the park welcomed 701,358 international tourists up 1.8% over the same period last year. The entrance fees generated a revenue of USD20.3 million up 2.5%.

The largest sources markets, based on ticket sales, were China, South Korea and Japan.

The entrance fee to the Angkor Historical Park costs USD20 a day (foreigners only), USD40 for a three-day visit and USD60 for a week-long visit. 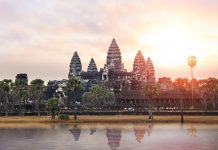