PHNOM PENH, 12 May 2015: Cambodia won an award for being the best cultural and heritage tourist destination at last week’s World Travel Fair in Shanghai.

Phnom Penh Post quoted the Tourism Ministry secretary of state, Tith Chantha, saying the award was given to Cambodia for its clean and green environment, good security, food and hospitality.

The fair’s destination awards focused on the 50 countries participating at the show and reflect the organiser’s evaluation rather than a wide cross-section of travel consumers or even trade visitors.

“It is the positive sign for us to get noticed for our green tourism sites. Of course, it benefits our tourism industry a lot as it will promote us and more tourists will come,” he said adding that Chinese tourists have increased around 20% every year, compared to other markets. This award should help bring more Chinese tourist to Cambodia.

Cambodia Agent of Travel Agents president, Ang Kim Eang, added the award “will not only attract Chinese tourists to the kingdom, but also promote Cambodia to other potential markets.”

According to World Tourism Organisation 97.5 million outbound Chinese travellers spent USD128 billion on their travels in 2013, the highest in the world.

Earlier, Siem Reap province, home to Angkor Wat, was ranked No 2 among the world’s top 25 tourist destinations and No 1 in Asia by TripAdvisor, an online travel site. The survey represents the opinions of millions of site visitors and carries consideably more weight than a trade show award. Tourists lose their drones and phones 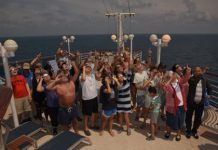